George's Lounge In The News 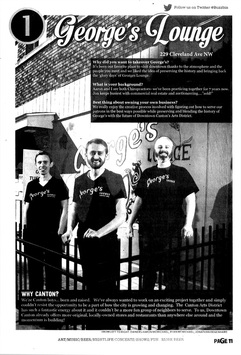 Dear Hank & John Visit Canton - Episode 159 (@ 20 minutes)
Podcasters Hank & John make an unexpected visit to George's Lounge while stopping through Canton on a national tour: "The tour was a complete whirlwind and I was only on half of it, and even though it was a week a go I remember almost nothing. But I do have one extremely vivid memory...George's...We went there and it was the best restaurant and experience I have ever had in my entire life. I loved it very much...Anyone near Canton go on over and see George's...hear more 20 minutes into the podcast.
Dear Hank & John Podcast / October 15, 2018
​
Canton exceeds expectations
Canton boasts an assortment of eclectic eateries, cafes, coffeehouses and food trucks...at George’s Lounge (once a crooner’s bar where Dean Martin sang), gourmet burgers and handcut fries with “dipster” sauces are local favorites. The sauces aren’t your run-of-the-mill flavors, but rather interesting concoctions like Spicy Thai Peanut, Ohio Maple Syrup, Blue Ribbon Beer Cheese and Ben’s Peanut Butter. Wash it all down with a Grannie’s Dutch Apple Pie shake or a local craft beer...read more.
Debbie Stone / Northwest Prime Time: Travels with Deb / September 4, 2018
​
Local Faves: Activities & Entertainment | Readers' Picks
Live Music Local Fave Award: George's Lounge...read more.
Kelsey Davis / About Magazine / August 22, 2018

​Stark 11: Best Places to Get a Burger in Stark County
Head over to George’s Lounge in downtown Canton to try their burger of the month! Every month, the kitchen staff at George’s Lounge creates a unique burger masterpiece for you to try! There’s a new one every month, so of course you should try it! Go on a Wednesday for $5 burger day; a great deal you can’t find anywhere else...read more.
Garrett Moore / visitcanton.com / June 10, 2018

When it comes to burgers, George's Lounge sets the bar
The folks at George’s Lounge reopened their kitchen at just the right time. The downtown Canton institution brought back their fare just a few days before the May 28 celebration of National Hamburger Day. After a mid-February fire closed the bar and grill, George’s returned its full kitchen operation May 15, bringing back its highly popular, fresh burgers. “The only thing we have here that isn’t made fresh daily are the condiments — ketchup, mustard and vinegar on the tables,” said Ruby Howell, a bartender at George’s. Known around town for its burgers, Howell said the most popular burger is The Big Onesto, which is made with crispy bacon, a fried egg and American cheese on a pretzel bun...read more.
Denise Sautters / Canton Repository / May 23, 2018

Are these the 50 best bars in Ohio?
What are the 50 best-reviewed bars in Ohio? We recently set out on a quest to answer that question by scouring Yelp for their highest-rated pubs, bars and nightclubs...The Canton Repository has showered George's Lounge with Reader's Choice awards, and Yelp users praise the burgers, the french fries and the drink selection. They have plenty of beers to fit any taste and budget, and often host live music, making it a great entertainment venue as well as a great place to eat and drink...read more.
Patrick Cooley / Cleveland.com / April 11, 2017

Feast Awards: Burger Wars - #3 George's Lounge
Dan Kane awarded The John Wayne burger his Judge’s Pick because its many layers and toppings meshed well together. The burger was fresh, and the onion ring stayed crispy. The barbecue sauce added a nice sweetness to the burger. It was assembled carefully and held together bite after bite...read more.
About Staff / About Magazine / February 20, 2017

George's Lounge serving its famed burgers at fair
Any doubts about how George’s Lounge would be received this year at the Stark County Fair were fully evaporated by lunchtime on Wednesday. “The line was out the door and stretched around. We couldn’t make burgers fast enough,” said Cari Irvin, who has been help cook this week at George’s first-time fair location, the former Pike Grange on the back of the grandstand...read more.
Dan Kane / Canton Repository / September 1, 2016

Local Faves: Neighborhood Bar - George's Lounge
Here are your Local Faves in the Food & Dining category. Did your favorites make the list?...read more.
About Staff / About Magazine / August 22, 2016 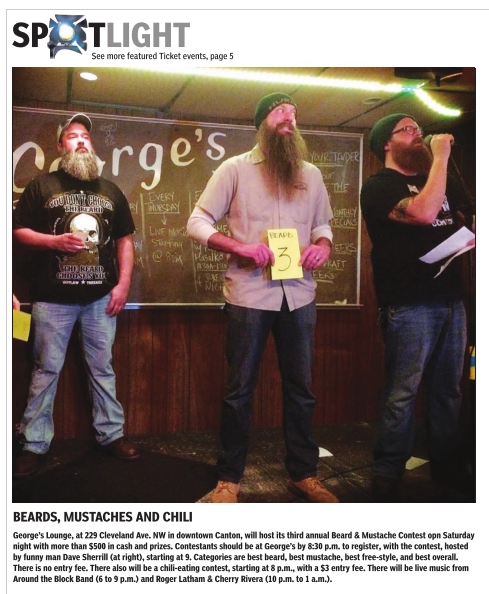 cantonrep.com
Stark After Dark: Hipster Hangouts
A downtown Canton hangout since 1959, George’s takes its location in the thick of the Arts District to heart with live music at least three times a week. The bar is old-school cool— weathered booths and bar stools crammed around a center wooden bar and serves everything from cheap domestics to craft beer and cocktails...read more.
Jessica Holbrook / About Magazine / March 28, 2016

Stark After Dark: Live Music Spots
In addition to its justly famed cheeseburgers and fries, this old-school bar in downtown Canton features live music on a tiny stage. There is no cover charge...read more.
Dan Kane / About Magazine / March 22, 2016

George's Lounge offers a cool place to chill and eat
George’s Lounge is a bar for people who like an old-school feel with new-school flavors. You don’t come to George’s to watch the game or stare at your phone (you can do that at home, you know) but it’s a good, low-key, friendly place to eat, drink and ideally be merry and communicate between cheap drinks and good food....read more.
Malcolm X Abram / Akron Beacon Journal / January 29, 2016

Top 10 Bars in Canton: George's Lounge
With everything from craft beers and cocktails to mouthwatering martinis and locally produced wines, there’s always a good time to be had in Canton, Ohio. Take a tour of it best bars with our guide, and experience brand new brew pubs, intimate wine bars, and some of the best live music venues in the region...read more.
theculturetrip.com / November 2015

Downtown Canton | Gourmet Grub: George's Lounge
George Lungociu first opened his namesake lounge at Third Street and Piedmont Avenue NW in 1959 and later moved to his current spot in 1972. George’s is a staple attraction of the Canton Arts District, known for its gourmet burgers, cheap beer, eclectic jukebox and live music on the weekends. George’s looks like a lounge straight out of the ’70s, and its retro vibe is adored by longtime patrons and newcomers alike....read more.
B.J.Lisko / About Magazine / October 26, 2015
My Local Faves: The Big O'nesto Burger
I never would’ve thought that a burger would taste better with an egg on top, but it does. George’s Lounge knows what it’s doing when it comes to burgers. When I go out to dinner, I often will get a burger. I’ve had my fair share of burgers from many different restaurants. But I must say that The Big Onesto is the best burger I’ve ever had. George’s always makes its burgers so juicy. And the pretzel bun is the perfect added touch...read more.
Kelsey Reinhart / About Magazine / September 16, 2015

200 Things That Play in Stark County: Dig in at George's Lounge
Walk into George’s Lounge at 229 Cleveland Ave. NW in downtown Canton and you might feel as if you are in a time warp. The place looks like it hasn’t changed since the ’70s, and it probably hasn’t...These days, George’s is a staple attraction of the Canton Arts District, famed for its gourmet burgers ($5 with fries on Wednesdays), $2 beer menu, eclectic jukebox and live music on weekends. The crowd ranges from 20-something hipsters to seniors...read more.
Julie Venetti / Canton Repository / July 8, 2015
2015 Canton Repository Reader's Choice Awards: Best Burger Runner-up
Runner-up? Watch your back #1...
Canton Repository / 2015

Ticket's Area Burger Tour
Mention the handcrafted burgers at George’s Lounge to anyone who’s eaten one and the reaction is likely to be "Mmmmmmmmmmmmm." They’re that good, and a special favorite of downtown Canton’s arts and music scene, which can appreciate the kitchen’s 2 a.m. closing time Tuesday through Saturday....read more.
Dan Kane & Julie Venetti / Canton Repository / June 25, 2015
Feast Awards 2015: Late Night Bites Award
For those for whom a burger is “just a burger,” George’s Lounge in downtown Canton ups the ante—a perfectly crafted “Geormet Burger,” cooked to order, with no skimping on the imagination—served from 11 a.m. to 2 a.m. That earns it a place in my heart, and our Late Night Bites Feast Award....read more.
Jess Bennet / About Magazine / February 23, 2015

Loose and unpredictable, they serve as talent showcases for whatever musicians happen to show up, from solo-acoustic performances to full-band collaborations...“Sometimes you create magic and it’s amazing,” said Eric Brooke, a singer, guitarist and longtime local open-mic host. “There are those fleeting moments where you’re blown away and it makes everything worthwhile.”

DECK THE WALLS: 'Goofy-Foot Skateboard Art Show'
Jorge Cervantez, the elaborately bearded young street artist who’s lately become a downtown Canton fixture, has been skateboarding for about as long as he can remember...Cervantez has combined his passions for skateboarding, art and live music by co-organizing an exhibition opening from 5 to 8 p.m. Saturday at George’s Lounge. “The Goofy-Foot Skateboard Art Show” will feature more than 100 skateboard decks painted and otherwise decorated by area artists...read more.
Dan Kane / Canton Repository / March 27, 2014

First Friday Draws a Crowd
Around 2 p.m. on Friday, Feb. 7, the last of the lunch crowd was paying their bills and drifting out into the winter sunshine as an acoustic guitarist finished his set. It was a brief intermission for the crew at George’s Lounge, 229 Cleveland Ave. NW, before spending the next few hours prepping for what likely was their busiest night that month. It was First Friday, a monthly arts and music showcase that draws a large crowd to the downtown Canton Arts District...read more.
Jessica Holbrook / Stark Business Journal / March 3, 2014

A Dozen Downtown Lunch Spots
Downtown Canton has no shortage of restaurants to choose from for weekday lunches. Here are a dozen recommended spots, most of them serving in the evenings as well...George's Lounge: High quality bar food is offered at lunchtime Thursdays and Fridays at this retro watering hole...read more.
Dan Kane / Canton Repository / December 12, 2013
The Best Burgers in Canton Ohio
George’s unexpected kitchen expansion has given us a wonderful option for comfort food. The burger fixings range from beer cheese and onions, to mozzarella and marinara, and they even threw in mango with sweet chili sauce on their large-sized patty! Not only did they roll out locally raised, grass fed burgers, they have some of the tastiest fries as well, available with several unique toppings include PBR cheese sauce. The selling point here is that you’ll find George’s in downtown Canton and have an atmosphere unlike the other spots listed in this post. Instead of sports on big screens, you’ll have a live band or an acoustic set on stage and the stranger next to is sure to strike up a convo...read more.
Lisa Davala / Two Amused Bouches / December 19, 2013

Why Canton?
I've been bouncing around Canton since 2008 and never before have I seen it as happening like it is now. Like I said a few pages back, there is new business popping up on  a monthly basis it seems. Just in time I have planned this article I can think of as least five other new businesses that are worthy of being in these pages. However, for now we are talking about George's Lounge...read more.
"Buzzbin Mike" Nasvadi / Buzzbin Magazine Canton / November 2013

Georges Lounge Canton
George’s has been in the downtown Canton area for over 50 years, but I only recently wandered in on a First Friday. The outside of this Canton bar is pretty low-key and doesn’t exactly scream “walk in.” Once you do step foot into the dark doorway, you are pleasantly surprised with the interior – a cozy, wood paneled space and an oval bar that takes up a large portion (maybe 75%) of the shoebox shaped room. The bar is lined by booths on the right...read more.
Lisa Davala / Two Amused Bouches / March 19, 2013

Doorway to George's Lounge is Giant Beer Mug
Wow! That’s the only applicable word for the latest public art to liven up downtown. Tyler Joy, a fine-arts junior at Kent State University, took the challenge of turning dingy brick facade at George’s Lounge into a colorful, vertical welcome mat. For a young guy whose professional goal is becoming a muralist, his calling card should be that creation...read more.
Dianna Rossetti / Canton Repository / October 26, 2012